NEET 2023 syllabus comprises of chapters from Physics, Chemistry, Botany, and Zoology. All questions are multiple choice questions only. Each correct answer awards 4 marks, while 1 mark is deducted for every correct attempt. In case of unattempted/unanswered questions, no marks would be given.

Language of Question: You need to choose one language out of these 13 NEET UG question paper languages:

Review NEET 2023 syllabus below and download its PDF by using the link of NEET information brochure given below:

UNIT I: Physical World and Measurement

UNIT V: Motion of System of Particles and Rigid Body

UNIT I: Some Basic Concepts of Chemistry

UNIT III: Classification of Elements and Periodicity in Properties

UNIT VI: General Principles and Processes of Isolation of Elements

UNIT I: Diversity in Living World

(Imp: Diseases and disorders mentioned above to be dealt in brief.)

UNIT IV: Biotechnology and Its Applications

Write your query (s) if any through the comment box below. 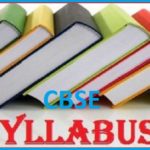