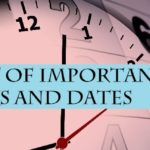 Find below the list of important and special days and dates in 2023. We have covered the both national and international special days to be observed this year. This will boost your General knowledge and help you to understand the particular day in detail. Moreover, it will also help in scoring outstanding in your upcoming […] 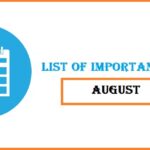 August is the eighth month of the year in the Julian and Gregorian calendars that comes after July and before September. Originally names as Sextilis, the month were later renamed after Julius Augustus, the first Roman Emperor. In this month, a number of important days are observed, some of global importance and others of national […] 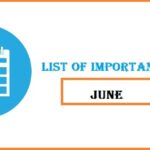 All important and special days in June 2023 are listed below and it also includes World Milk Day, World Environment Day, World Food Safety Day, World Blood Donor Day among others. June is the sixth out of twelve months in a Gregorian calendar that come after May and before July. The month is named after […]