Sebastian Pinera is the most famous Chilean billionaire politician as well as a businessman with a net worth of almost $ 2.7 billion. Check more details about Sebastian Pinera’s net worth, career, biography, and many others.

In addition, Sebastian Pinera has owned parts of LAN airlines, chilevision, and Coco-Cola. More so, he served as leader of national renewal from 2001 to 2004 and senator of Chile from1990 to 1998. When he was elected in 2010, he became the 1st billionaire to be the president of Chile. Moreover, this article will describe to you all the information about his net worth and other details about Sebastian Pinera’s life.

According to estimates, Sebastian Pinera’s net worth is almost $ 2.7 billion. He earned most of the money from his business and political career. His net worth is rising each year. He is not only a rich politician but also a most successful man.

Sebastian Pinera was born on Dec 1, 1949, to Jose Pinera Carvallo and Magdalena Echenique Rozas. He has three brothers named Juan Pablo, Jose Manuel, and Jose Miguel and two sisters named Maria Teresa and Maria Magdalena. When he was only one year old, his family shifted to New york city. His father worked for the Chilean economic development agency.

Moreover, when his family returned to Chile in 1955, he graduated from the Divine word college. After completing his study of business and administration at Pontificial catholic university of Chile, he received his master’s and a doctorate in economics from Harvard University in the US.

In 1979, Sebastian Pinera founded Bancard, a credit card company that introduced Chileans to a new method of paying for services or products. Similarly, he was also the official representative of Apple computers in Chile. Plus, in 1998, Sebastian Pinera served as senator for the Eastern Metropolitan Region’s 8th voting district. After that, he was selected as the president of Chile in 2010. He improved the quality of life from 2010 to 2014 as a politician. Also Check Richest Presidents & Prime Ministers in the world

Sebastian Pinera married Cecilia Morel Montes in 1973. His wife was a Carlos Casanueva institute counselor. They have been blessed with four children such as Magdalena, a history professor; Sebastian, a business administrator; Cecilia, a pediatrician; and Christopher, a psychologist.

In 1989, Sebastian Pinera founded the Fundacion Mujer Emprende with his wife Cecilia Morel with the goal of giving education to disadvantaged women and vocational training. Plus, in 1993, he also founded the foundation Fundacion Futuro with the goal is to help Chile progress toward justice, freedom, and democracy. The foundation was renamed Fundacion Cultura Sociedad.

It can conclude that Sebastian Pinera is the most prominent and successful politician who is becoming rich day after day. He has a lot of followers on social media accounts. After making a lot of effort and hardwork, Sebastian Pinera becomes the top-of-line president of Chile.

Is Sebastian Pinera, a billionaire?

Sebastian Pinera is a billionaire who earns a lot of money from his political career.

What is the current age of Sebastian Pinera?

What is the height of Sebastian Pinera? 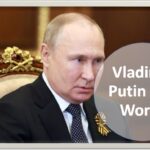 Vladimir Putin Net Worth [2023] and Biography