Normally, Vaikuntha Ekadashi is observed in the month of January or December every year. It is believed that the Lord Vishnu opens the gate of His inner sanctum on this day and observing a fast with utmost devotion helps attaining Moksha.

This day is also celebrated with great enthusiasm Sri Ranganatha Swamy Temple, Srirangam where the celebration lasts for up to 20 days. At Tirumala Venkateshwara Temple, a large number of pilgrims visit every year on the day of Vaikuntha Ekadashi.

Complete details about Vaikuntha Ekadashi 2023 such as date, timing, method of observance, etc can be found from this article. 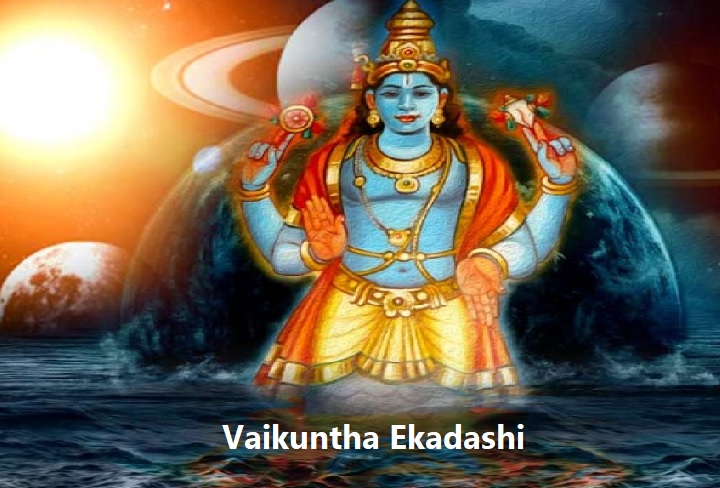 Vaikunta Ekadasi is one of the most significant Ekadasi among all the Ekadashi that falls throughout the year. Devotees believe that holding a fast on this day can help them cross the gate of salvation and will reach up to heaven.

On the day of Vaikuntha Ekadashi, Lord Vishnu opens the gate to His abode ‘vaikuntha’ and it is said that listening to the Ekadashi story on this day, they can feel Vishnu coming out of the door called Vaikunth Dwar.

Many temples all over India make a door-like structure similar to Vaikunth Dwar and devotees visiting the temple on this day walk through this door. 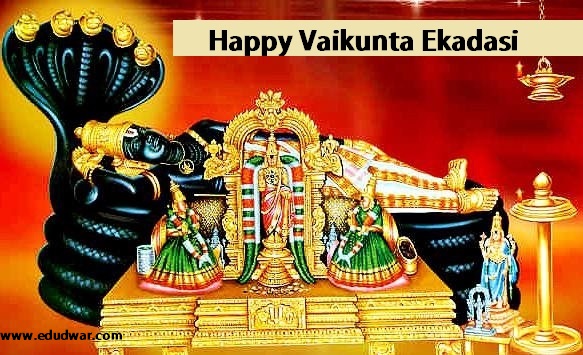 The process of Vaikuntha Ekadashi vrat begins one day before, i.e., on Dashmi, where the devotees observe a Nahaye-khaye. They take their only meal after taking a bath and that food is prepared without any onion or garlic in it.

Next day, which is the day of Ekadashi devotees get up early in the morning and take a sacred bath. They worship and offer prayers to Lord Vishnu seeking His blessings in providing them salvation. Devotees recite mantras and jaaps to please Lord Vishnu and offer Him sweets and fruits.

People should refrain from eating rice on this day, even if they are unable to observe a fast. Giving alms to the poor is also a famous practice on the day of Ekadashi and is believed to please Lord Vishnu.

Vaikuntha Ekadashi tells the story of female energy of Lord Vishnu who killed the demon named Muran and freed the devas from their misery. The story goes as follows:

Once upon a time there was a powerful demon named Muran who was creating havoc on both earth and heaven. Tired of his tyranny, all the devas visited Lord Vishnu and sought His help in destroying the demon. Lord Vishnu fought with the demon but realized that He need to build a special weapon to kill the demon. As Lord Vishnu was in process of resting and weapon making, Muran tried to attack and kill him.

However, before this could happen, a female energy emerged from the body of Lord Vishnu and killed the demon. Lord Vishnu named the female energy as Ekadashi as it was the 11th day of the night. He also gave her the blessing that anyone who observe a fast on this day will be relieved from their sins and attain salvation (Moksha).

When is Vaikuntha Ekadashi 2023?

What is Vaikuntha Ekadashi 2023 parana time?

When will Vaikuntha Ekadashi tithi start? 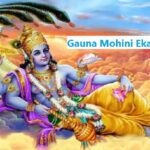 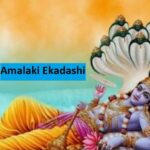 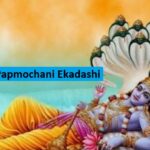 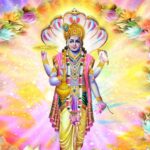 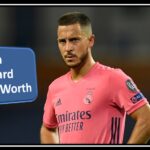 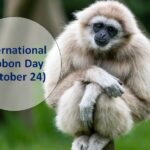