Know here when is Kurma Dwadashi vrat in 2022 and its immense importance, vrat vidhi and vrat katha along with other details.

Dwadashi is the twelfth lunar day which falls in both Shukla paksha and Krishna paksha and falls on the day after Ekadashi. Just like Ekadashi, the Dwadashi vrat is also dedicated to the worship of Lord Vishnu. Kurma Dwadashi is one such auspicious vrat in which Lord Vishnu is worshipped in his Kurma avatar or tortoise incarnation. Kurma was the second Avatar of Lord Vishnu that is related to Samudra-manthan. Kurma Dwadashi falls on the day after the Pausha Putrada Ekadashi vrat. Observing a fast on the day of Kurma Dwadashi is believed to liberate a person from all of sins and also helps in attaining salvation. For those who look forward to observe the Kurma Dwadashi Vrat 2022 can get the details like pooja vidhi, vrat katha, date and timing, etc from this post. 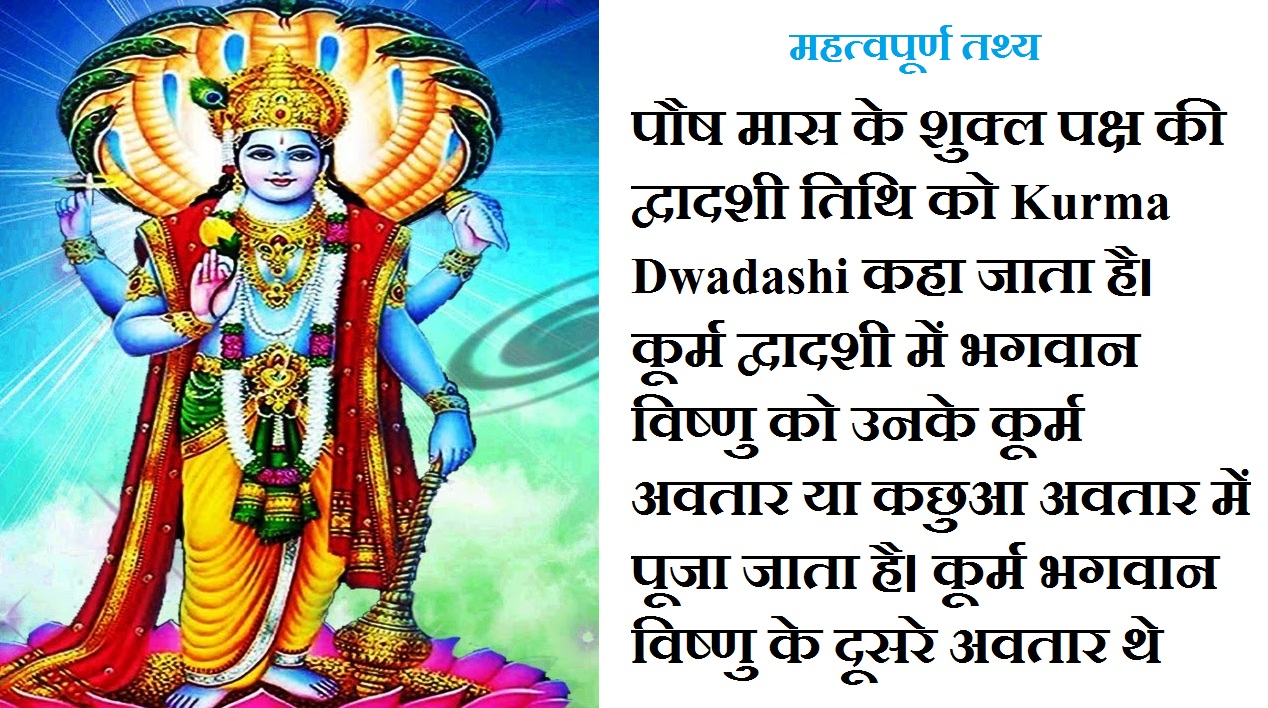 People observe Kurma Dwadashi vrat to please Lord Vishnu as it is a strong belief that He will forgive all their sins and provide them a path to attain Moksha (salvation) if a fast is kept on this day. Most people observe this fast in combination with the Ekadashi vrat and they observe a fast that is two days long.

How to observe Kurma Dwadashi Vrat 2022?

Kurma Dwadashi Vrat is dedicated to Lord Vishnu who is worshipped in his tortoise incarnation. Devotees believe that observing a fast on the day of Kurma Dwadashi helps in redeeming all the sins committed by a person in the previous life. Normally, most people observe the Dwadashi fast along with the Ekadashi fast and thus the nahaye-khaye begins from the day of Dashmi itself. On the day of Dwadashi, devotees should take a holy bath and put on clean clothes. On a wooden plank, also known as peeta, they draw a Rangoli and place an idol or picture of Lord Vishnu, preferably in His Kurma avatar. Many people prefer placing crystal idol of Kurma on the peeta. The peeta is also decorated with flowers and colors. Once the idol of Lord Vishnu is established on the peeta, chanting of mantras and reciting of vrat katha begins. Devotees also offer Lord Vishnu flowers, fruits and sweets and seek His blessing in the form of forgiveness of their sins.

Pooja and vrat katha are also held at many temples dedicated to Lord Vishnu and devotees in large number attend the pooja. Mantras are recited all day long and holy offerings (prasad) are distributed among the devotees. Foods and alms are given to the poor and hungry people as feeding the hungry is believed to be the best way for redemption of one’s sins.

Kurma, which means turtle, is the second avatar of Lord Vishnu who appeared at the time of churning of the ocean by the devas and the asuras. The story of Kurma Dwadashi vrat is related to Samudra manthan and it goes as follows: Indra Dev, the king of Swarga lost his power and fortune along with all other devas, as a result of curse from sage Durvasa. This resulted in their defeat by the asuras who drove all the devas from Swarga lok. All the worried devas visited Lord Vishnu and asked Him to help them regain the Swarga lok. Lord Vishnu asked the devas to act in a diplomatic manner and suggested the Samudra manthan. Asuras agreed and the process of churning ocean begin with divine serpent Vasuki as the rope. Samudra manthan released a lot of things from the ocean, both good and bad. The ocean also released nectar (amrit) and poison (vish) over which both devas and asuras started fighting. Shiva drank the poison produced and kept it in His throat whereas the asuras started running away with amrit. The Kurma avatar then transforms into a femme avatar known as Mohini and started seducing the demons. Mohini was able to get the amrit from the asuras and gave it to the devas which provided them with immortality.

It is therefore believed by the devotees that by observing fast on Kurma Dwadashi and praying Lord Vishnu in his Kurma form will grant all their wishes and provide them immortality in the form of Moksha.